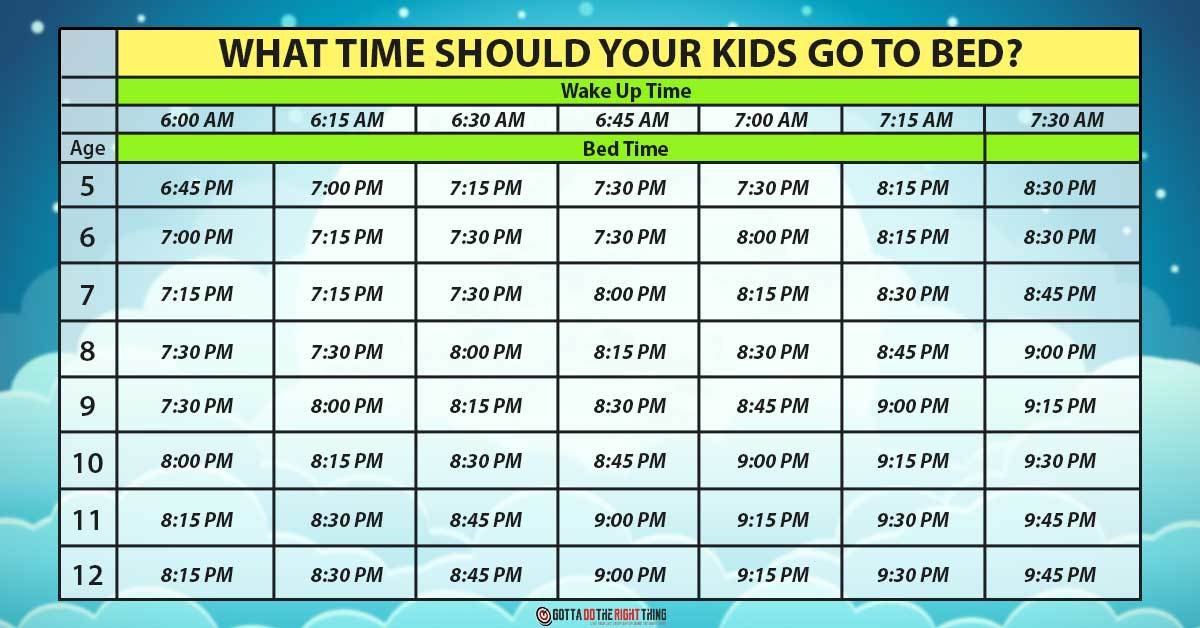 “When is the right time to put children to bed?” is something that many parents wonder about. When kids go to bed too early they never get to sleep, get hyper, and become too lazy.

When they go to bed too late, they are extremely tired the next day and struggle to make it through the day. Since parents are working a lot, they want to find enough time to spend with their beloved ones, but they also want them to have proper rest.

Fortunately, in Kenosha, Wisconsin, the Wilson Elementary School has developed a chart to help parents. It is based on the usual wake-up time and age. For instance, a kid at the age of five needs to wake up at 6:15 in the morning, and they need to go to bed at 07:00 in the evening.

A kid at the age of ten needs to wake up at 6:15 and needs go to bed at 08:15 in the evening. According to AAP, children the age of three to five need ten to thirteen hours of sleep, and kids aged six to twelve are good with nine to twelve hours.

Why is Bedtime Important?

People have shared this chart on Facebook thousands of times, and there is a good reason behind that. Getting enough sleep is crucial for the health of children.

According to a study, consistent mealtimes and bedtimes decrease the risk of obesity in children. Also, another study revealed that kids who go to bed early can make their families happier.

Since the chart created by the Wilson Elementary School does not include bedtime for kids under the age of five, here are the recommendations of AAP:

Even though these recommendations may not work for some children, it can be of help to have a guideline. (1)

How to Get Children to Bed Earlier?

The most important thing is to limit the time that children spend in front of screens before bed, as researchers explain. The National Sleep Foundation (NSF) says that blue light delays the release of melatonin, which is a hormone that regulates sleep.

Also, the blue light resets the internal clock of the body and increases alertness. So, researchers recommend the use of phones, TV, tablets, and computers just an hour or two before sleep. (2)

Additionally, the NSF recommends a bedtime routine. For instance, a good book and a nice and calming bath. Whatever you choose would be of great help if you do it regularly.

Keep in mind that the sooner you establish some routine, the better. We hope that this article would be of help to you and your children.