How to Reduce Mucus and Phlegm from the Throat and Chest 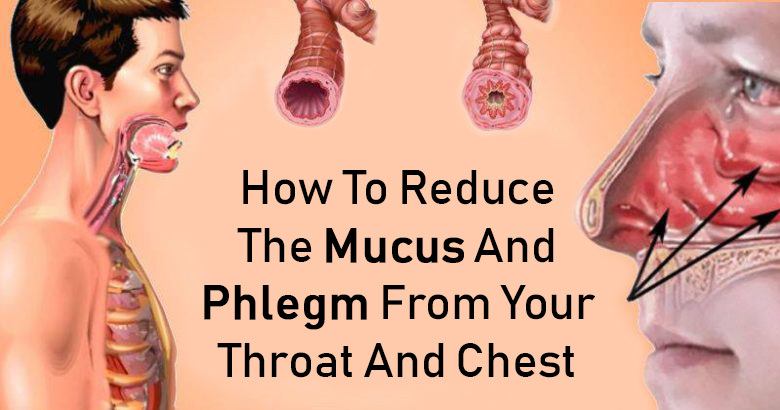 People with nasal and throat blockages have phlegm deposits in the lungs which cause breathing problems and increased coughing. Although it’s not a fatal issue, it can interfere with our everyday life.

Also, if we do not treat this problem, it may cause us even more health problems.

Phlegm in the Lungs

For those who do not know, phlegm is a sticky substance secreted by the mucus of the ventilator system. This substance is sticky because of its protective role to catch dust, viruses, and allergies. Among its main roles is preventing infections such as colds.

When one feels an urge to cough it means they have excess mucus in the throat and the chest, which can be a result of bacteria, viruses, flu, and so on.

The rest of the symptoms are fever, weakness, difficulty breathing, and runny nose. The phlegm blocks the bronchial tubes if it is not removed properly.

How to Reduce Mucus in a Natural Way

Even though there are meds that can be helpful, in order to avoid side effects, there are natural ways as well. Below we offer you 4 methods you may find useful.

Ginger is a healthy remedy which is antibacterial, antiviral, antihistamine, as well as a natural decongestant. (1) So, it can ease throat and chest congestion by removing excess phlegm. The best way to use ginger is in tea. If you want to prepare this tea, you need:

Boil the water, then add the peppercorn and the ginger. Wait for the mixture to boil. When it starts boiling, you should cover it and let it stay for 1 minute.

After a minute set the heat to medium and let the tea simmer for five more minutes. Finally, when you remove it from the heat, you should add honey. You can consume two cups a day.

Both lemon and honey have antibacterial and antifungal properties. The lemon has a lot of vitamin C so that it will prevent congestion, and it improves the immunity. Also, lemon’s acidity breaks down the mucus. (2) To make this mixture, you need:

Make a mixture of both ingredients till you get a homogeneous blend. Take this mixture three times per day.

Turmeric is healthy and helpful because the curcumin which is contained in it has antiseptic as well as antibacterial properties that remove the bacteria that cause mucus. Likewise, it makes your immune system stronger.

To make this mixture, you need to take a glass of warm water, add a teaspoon of turmeric powder, and half a spoon of salt in it. Use this mixture to gargle three or four times a day.

Steam inhalation is great because you can do it at home. In order to make this inhalation you need:

To make this steam inhalation, put the herbs in the boiling water. Then, bend over the steam, cover your head with the towel, and do not let the steam get away. Inhale the steam for about five to ten minutes. Do this several times per day.

Remember, although these treatments are good for some people, it doesn’t necessarily mean that they will be beneficial for you as well.

These recipes are traditional Grandmother’s-Remedy that have been used for hundreds of years. Although there is no scientific evidence to support these claims, our Grandmothers swear by it.